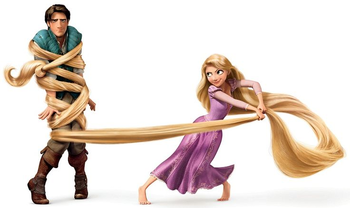 Naveen: But when you're living in a castle, everything is done for you: all the time they feed you, dress you, drive you... brush your teeth!
Tiana: Aw, poor baby.
Naveen: I admit it was a charmed life, until the day my parents cut me off, and suddenly I realized...I don't know how to do anything.
— The Princess and the Frog
Advertisement:

In a lot of fairy tales, there is one hero and one heroine (though The Prince and the Pauper and the like are notable exceptions), there will be a lot of emphasis on how infinitely talented the girl is, but not as much on the guy. The girl (who is usually either a princess or a regular girl who will become a princess later in the story) can have any range of talents, including singing (obviously), dancing, cooking, painting, or even kicking people's asses. This can occur in one of three situations:

As for the guy? The guy may or may not be a prince, but he is usually given one of three talents: