Theatre / Once Upon a Mattress 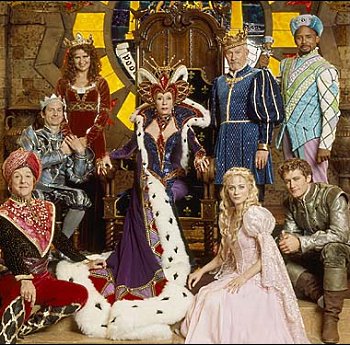 A musical comedy that parodies the well-known story of "The Princess and the Pea", Once Upon a Mattress started as a Broadway play, then later appeared as a TV special (more than once). It premiered in 1959, with music by Mary Rodgers, lyrics by Marshall Barer, and book by Jay Thompson, Dean Fuller, and Marshall Barer. As The Other Wiki states, it's a popular choice for high school and community theater shows.

Its most prominent claim to fame is that it was the breakout role for actress Carol Burnett, who played Princess Winifred on Broadway, and appeared in several TV versions of the musical (first playing the princess, and then the Queen as she got older). One Broadway revival featured Sarah Jessica Parker in the role. Tracey Ullman played her in the 2005 TV film, which premiered on The Wonderful World of Disney.

A royal minstrel reveals to the audience that the princess and pea story they've all heard (and is recreated as an Opening Ballet) wasn't exactly what happened — he was there and has firsthand knowledge of the truth. Queen Aggravain (whose husband King Sextimus was rendered virtually powerless after he was made mute by a curse) was determined never to let her son Prince Dauntless the Drab marry, so she was constantly creating impossible tests for prospective princesses to pass before they could have his hand. To make matters worse, no one in the kingdom was allowed to wed until he was. Sir Harry, alas, had just learned that he and his sweetheart Lady Larken were expecting a child, so he headed out to find a princess who hadn't yet gone through the tests. He brought back the feisty swamp Princess Winifred the Wobegone — "Fred" for short — who instantly won Dauntless's heart. Now the evil Queen had to come up with an impossible test...