Literature / The Prince and the Pauper 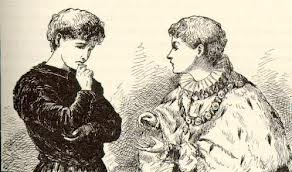 The Prince and the Pauper is an 1882 Mark Twain Historical Fiction novel about a Street Urchin named Tom Canty and Prince Edward VI of England, son of King Henry VIII, switching places.

In the year 1547, Tom has always dreamed of a better life, and Edward is fascinated by Tom's lifestyle. When they exchange clothes just for fun, they accidentally end up mistaken for each other, and the boys become forced into each other's everyday situation. Tom has matters of national importance to attend to and has a hard time adjusting to court life, and Prince Edward finds out just how hard an urchin's life is.

The book has been adapted to film many times:

It is the Trope Namer for Prince and Pauper, and arguably the story is Lost in Imitation.