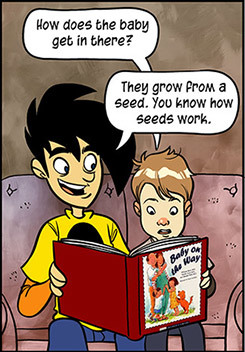 A conversation, usually between parent and child, about sex. May be occasioned by the question, "Where do babies come from?"

Awkward: A serious conversation that runs the gamut from mildly awkward to horribly painful, with the elder speaking nervously and the younger reaching for the Brain Bleach. The sexual acts and organs themselves are always described circumspectly. One frequent subversion is that the kid was asking for completely innocuous information, like what to put on the "Sex" line of a form.

Ironic: A humorous conversation in which the child proves to be far more versed in the subject than their parent, having already learned the Facts of Life from school, friends, and media, or even through firsthand experience. May end with the fascinated parents taking notes or interjecting "You can do that?" This subversion is common enough that it has become a trope in itself (which makes this an Undead Horse Trope).

Most often found in Teen Dramas but also Played for Laughs in comedies.

Sometimes comic effect is added by the parent using toys (e.g. a G.I. Joe and a Barbie doll) as visual aids. (Please ignore the flaw in that arrangement...)

Occasionally, it's not played for laughs. This seems to be especially true when the child or teenager on the receiving end is a girl. She may be advised that her virginity is something that makes her valuable, and that losing it makes her lose that value...which she can never get back. She may be told that "boys only want one thing" (without too many specifics on what that "one thing" is). She may even be taught that sex is bad and she should see it as something she endures for her husband, rather than a good thing that both partners can (and should) expect to enjoy.

A kid who's considered too young to know the Facts of Life might be told about the Delivery Stork instead. The parents may try to leave it to the school, at the risk of their child being subject to the Sex Miseducation Class.

Compare Sexual Euphemism. No relation to the all-female Talk Show of same name - for that, see here.

Alternative Title(s): The Birds And The Bees