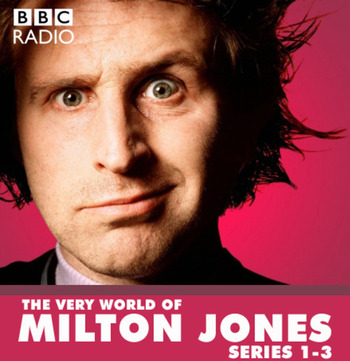 The Very World of Milton Jones is a British radio series starring "Britain's funniest Milton", Milton Jones. Each show begins with Milton's life flashing before his eyes due to a near-death experience; his guardian angel comes down to visit him, and together they discuss his life. At the end, the angel leaves him, but by some staggering coincidence - usually relating to something mentioned earlier in the episode - he survives.

Milton Jones has done some other series as well. Another Case of Milton Jones featured Milton's life in various jobs, including chessmaster (featuring the Russian university town of Untergrad), architect and mayor of London ("I discovered there was a secret network of tunnels under the city. Why hadn't I been told of this earlier?"). The House Of Milton Jones was a slightly more conventional Dom Com. And on occasion he pops up as a comic elsewhere.

Not to be confused with the other Milton.

Tropes used in these programs: