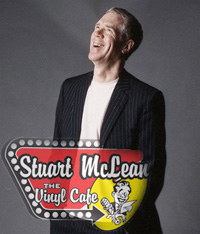 Stuart McLean.
"We may not be big, but we are small."
Advertisement:

The Vinyl Cafe was a weekly variety show on CBC Radio One, hosted by Stuart McLean until his death in 2017. In 2020, the CBC began re-releasing episodes in podcast form due to popular demand.

Every episode, Stuart plays songs from up-and-coming Canadian bands, while interspersing the music with his funny and nostalgic monologues on the often-overlooked and beautiful things in life. In addition, there are regular features like "The Vinyl Cafe Story Exchange" where listeners are invited to send in true personal stories to potentially be read on air, and the annual "Arthur Awards" to commend exceptional small good deeds performed by ordinary people.

But the most famous segment of the show is Stuart's series of Slice of Life stories on the life of Dave, the owner of a small record store, and his family. Told in his signature wistful and quirky style, the stories made Stuart McLean nationally famous; his story of Dave's adventure in cooking a Christmas turkey has already became a classic Christmas special on CBC.

The show is presented in one of two formats: studio episodes recorded in Toronto where McLean tells his stories while playing recorded music and performance episodes recorded on location in various venues with live audiences on his frequent tours predominately throughout Canada with a handful of US playdates with live musical performances. The main other difference is that for podcasting purposes, copyright laws dictate that studio episodes cannot be reproduced with the music recordings while the live audience episodes with their stage performances can be made available in their entirety.

Tropes about the show in general:

Tropes about Dave and Morley Stories: