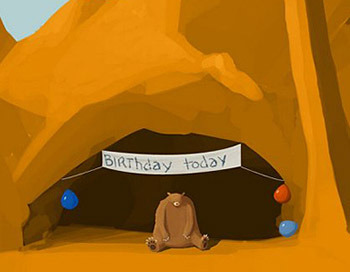 So it's a character's birthday. They hoped that others would notice. They have known each other for quite a while, how could they forget?

Alternatively, the birthday person may be the forgetful one instead, usually either showing how selfless they are or that they never really celebrated their birthday before.

Compare Doesn't Know Their Own Birthday for when they don't know their birthday in the first place, and Forgotten Anniversary for the wedding day variant. If the birthday wasn't truly forgotten after all, and the other characters threw a Surprise Party, it's a Not-So-Forgotten Birthday. If everyone knew about the birthday and it had been forgotten by the one who's celebrating it, then it's Forgot Their Own Birthday. Can lead to a One-Person Birthday Party or Convenience Store Gift Shopping. The opposite of Celebration Miscalculation, which can cover when a birthday is celebrated, but on the wrong day. If they're not invited to someone else's party, it's Uninvited to the Party.

In Season 8 "Are You There Bob? It's Me, Birthday", Linda forgot to do something important today and butchers Gene's haircut.

In Season 8 "Are You There Bob? It's Me, Birthday", Linda forgot to do something important today and butchers Gene's haircut.