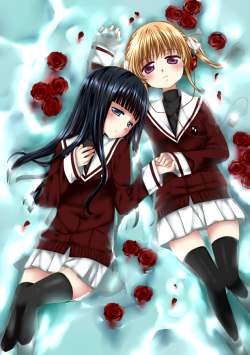 Cross Heart is a series of Web Original yuri manga by Ana Cristina Sánchez a.k.a. AnaKris, originally published in Spanish (and partially, English) on DeviantArt. The series follows the story of Haru, a cheerful schoolgirl who finds herself falling in love with her aloof but beautiful schoolmate Kotomi. Simultaneously, Kotomi is losing an uphill battle against some very serious childhood traumas underneath a Stepford Smiler facade. The story is divided into four (or five, depending on how you count) chapters:

To call this manga, particularly the third chapter, "Emotional Torque" would be an understatement—there wasn't a single dry eye among the readers back when the final pages of Breakdown were published.

Cross Heart was made available for purchase on paper

, fully translated to English and shipped worldwide, but is sadly sold out. A complete bound volume containing all three chapters was published in 2014.

However, as of December 2017 the complete edition is once again available in print, along with Melody of Sorrow, via the author's online store.