Must Make Her Laugh 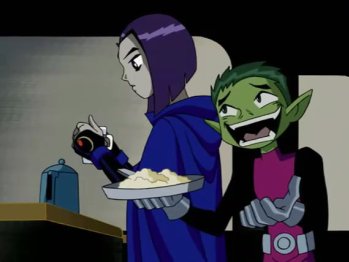 She thinks he's funny! No, really, she does!
"You know I'm hilarious. And I'm not going to give up until I get you to smile."
— Beast Boy, referring to Raven, Teen Titans (2003)
Advertisement:

He's the joker of the group. She's the Emotionless Girl or perhaps the Tsundere, maybe both. He makes it his mission in life to make her let out one of the most powerful emotional responses. It's a matter of personal pride. If he can break through her shell, he can brag about it for years.

Said girl's friends will wonder why she puts up with it. Don't expect his jokes to actually be funny. The comedy really comes from her reaction, or lack thereof. Compare Straight Man and Wise Guy for a similar setup.

This is often played as romantic interest. After all, guys like girls that laugh at their jokes and girls like guys who can make them laugh. And even if she doesn't laugh, she does at least listen. If it's meant to become a romantic relationship, don't expect them to resolve it anytime soon.

Most of the time, what finally makes her laugh wasn't even intended to be funny.

Can result in a When She Smiles moment, where the guy falls even harder for her when he finally sees her radiant smile.

Alternative Title(s): Must Make Him Laugh