Visual Novel / Voices from the Sea 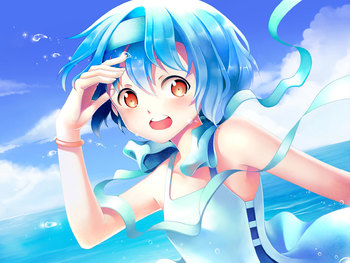 Voices From the Sea is a linear Visual Novel made by Zeiva Inc.

The story follows a boy named Cantus, who is depressed and sees the world through static, except when he is by the seaside. He spends every moment he can at the beach, which is where he meets a girl named Maris. After Cantus doesn't smile at all during their first meeting, Maris decides that she's going to make Cantus smile within a week somehow. The two of them develop a friendship as they spend time together and talk about seashells and other things.

This visual novel is short, and can be played for free online and on Steam. There is also purchasable bonus content.