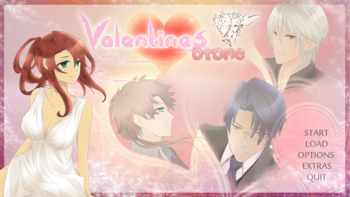 The main screen, feature Mira and her three love interests
"You and your house mates are NOT spending valentines day with a romantic dinner with that significant other - so what’s a girl to do? Party of course~ Dragging your best friend and cousin with you, you are determined to make sure that at least one of you has a blast. What happens next though is up to you."
-The official website

Valentines Otome is an original English language game made by Synokoria. It is available for free here

. It follows the events of Halloween Otome.

Mira Cosgrove (changeable name) drags her cousin, Maia, and best friend, Emma, to attend a party at a local club to deal with being alone on Valentine's Day. The trio meets three bachelors—Zane, the elusive writer, Daire, the hardworking businessman, and Kiron—one of the teachers at Maia's school! Many drinks later, Mira wakes up next to someone whose gold ring matches the one on her fourth finger...

Synokoria are currently working on their third title in the series, Christmas Otome

, which takes place after the events of Valentines Otome and features Mira’s cousin, Maia Cosgrove, as protagonist.