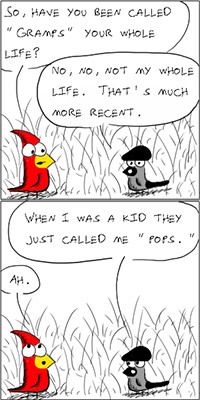 The remarkably common practice in kids' shows of not giving a character's parents actual names even if they're around, instead being addressed as Mom and Dad, or occasionally by their last names. While this is probably to insert the feel of a story being shown by a child's perspective, as children don't usually use their parents' first names, it can make for really odd dialogue when another adult has to talk to them. Or even when they have to talk to each other, assuming they don't constantly use generic endearing nicknames like "darling" and "sweetheart", which would make them Happily Married by default. In some cases, they will refer to each other as some variation of Mom and Dad.

Some shows can even make this official. For reasons left fittingly unexplained, a person's grandfather might actually be called Granddad, and anyone asking for him want to talk to Granddad. This can become problematic at times, however, when someone outside of the immediate family who would normally be on a first name basis with the parent is involved.

This is a subtrope of No Name Given. If their surname is known (usually because the child's full name is stated), overlaps with No Full Name Given. Compare Everyone Calls Him "Barkeep".