Western Animation / Grandma Got Run Over by a Reindeer 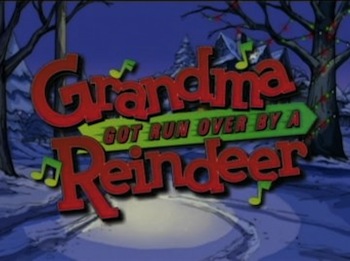 "It's the Christmas season. A time for telling colorful holiday stories. And my favorite story of all time is about my grandma. She had this encounter with a reindeer."
— Narrator
Advertisement:

Grandma Got Run Over by a Reindeer is a 2000 Christmas Special adapted from the eponymous Elmo Shropshire novelty song, and incorporating some of his other Christmas songs into the mix.

Grandma Spankenheimer is a kindly old woman who loves to spread Christmas joy in Cityville. She also owns the only piece of property in town not owned by the Own-All Corporation...but she refuses to sell, to the chagrin of Cousin Mel, who just wants the money. Meanwhile, Jake, the film's main character, still fervently believes in Santa though his parents are trying to find a way to tell him the "truth." Of course, Grandma inevitably gets run over by a reindeer then vanishes. As the only two witnesses are Jake and his senile Grandpa, nobody believes them. During Grandma's disappearance, Cousin Mel finally claims the store, leaving only Jake to save the store by proving Santa's existence. By the climax of the special, Santa is on trial for his crimes against Grandma and Cousin Mel is on the verge of getting both the store and (she assumes) the millions of dollars Santa must have by suing the crap out of him. Will Christmas prevail over evil? Will Grandma be safe? Will the villains get their comeuppance?

The special premiered on what was once The WB network and airs several times annually during the holiday season on its successor network, The CW. However, it is mostly known for its more frequent airings on Cartoon Network, during both the actual Christmas holiday and their Christmas in July events. Since 2017, it's been aired on Freeform.

VERY out-of-place in a Christmas movie.

VERY out-of-place in a Christmas movie.