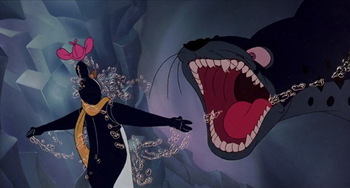 Despite having a reputation for cuteness, seals are also well-known for being predators, which aren't exactly the most beloved animals. Some, like the leopard seal, eat penguins, which is a bit of a problem, considering that people love penguins. And so, when they're not Ridiculously Cute Critters, fictional seals are often portrayed as either mindless brutes or malevolent monsters.

This trope mostly applies to large, stereotypically aggressive seal species such as leopard seals and elephant seals. Small ones, such as the harbor seal and the harp seal, are much more likely to be portrayed as Sweet Seals. If a small seal does act evil or aggressive in fiction, it's a case of Killer Rabbit. There's some aspects of What Measure Is a Non-Cute? involved here too; generally, the larger seals that prey on penguins and other seals are portrayed more negatively in fiction than the smaller ones that mostly eat fish, and fish aren't usually seen as cute or appealing enough to feel sorry for.

This trope also includes sea lions. They're different from seals — for instance, they have ear flaps, and flippers that allow them to "walk" on land — but are also included due to being highly similar to them in most if not all other respects; in fact, the entirety of the immediate clade that includes them both

consists of marine mammals of the same general body plan and carnivorous behavior, including walruses and fur seals (the latter being the sea lions' closest relatives). And their closest relatives? Bears.

Compare Wily Walrus (since walruses are related to seals), Threatening Shark and Devious Dolphins. Contrast Sweet Seal. Sub-Trope of Sea Monster. Not to Be Confused with Sealed Evil in a Can or seals on letters. Also not to be confused with Navy SEALs, although their targets may very well be scared. Has nothing to do with the singer Seal.