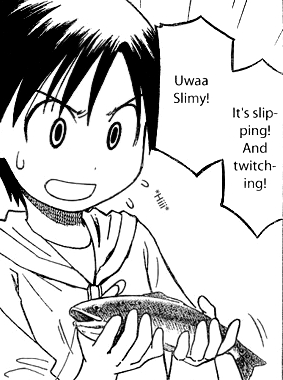 "Fish cannot be caricatured. Nature has already imagined every funny-looking personality. The skate family, for example, anticipated Picasso by millions of years. Although these flatfish spend their lives cruising around on their side, they are born upright, with eyes on each side of the head like any other fish. Gradually one eye crawls over to join the other, so that a diver staring down at the ocean floor sees a mouth in profile and two eyes on the same side — just like a Picasso portrait. This arrangement lets the fish look up for enemies, and if he wants food, he just flips over."
—Chuck Jones, quoted from pg. 60 of "Chuck Reducks: Drawing From The Fun Side Of Life"
Advertisement:

In most animated media, fish tend to be drawn hyperrealistically. Their movements are naturalistic, and they never exhibit any trace of personality, even when other animals or Mons are very iconic and anthropomorphic. This particularly noticeable in universes with other more cartoonish animals — and especially those with talking or sapient animals (though always averted in situations where said sapient animals are fish) — and also (if not most often) applies to fish being eaten, when compared to other food items.

In many animated universes, fish are actually the sole wild animals ever seen, possibly as a way of avoiding Furry Confusion and Carnivore Confusion. What Measure Is a Non-Cute? is the main reason for this: people tend to see fish as less relatable, and so they are able to be shown as food even if the setting doesn't allow other animals to be eaten.

Scott McCloud goes on in Understanding Comics about how Japanese comics can vary the level of iconic vs. realistic rendering: the more iconic the art, he states, the easier it is to identify with the characters. Making the fish look more realistic would make it easier to dissociate from it, and therefore easy to regard it as potential food rather than a living creature. More than one chapter examines the implications and uses of this trope.

An additional factor is that fish, having such simple body plans, tend to look very strange and possibly even unidentifiable when over-simplified. Try imagining the fish in the page image without detailed shading and scale pattern markings: what you are left with is a partially obscured tube with eyes, fins and a mouth. There really isn't much left to identify it as a fish, and the image would not trigger the same immediate recognition for the viewer. In cases where fish are presented in a cartoony style, they are likely to resemble the oval, large-headed bodies of reef and bank fish, sport patterned markings to create visual landmarks, and/or possess highly stylized anatomy to over-emphasize remaining features.

Sometimes used to solve the Carnivore Confusion problem while avoiding both Sapient Eat Sapient and Vegetarian Carnivore. While this trope mainly concerns fish, it can also apply to other animals that are thought of as "less anthropomorphic" then the main cast (for example, a cast composed of cartoon mammals would have non-cartoon fish while a cast composed of cartoon fish would probably have non-cartoon aquatic invertebrates).

Subtrope of What Measure Is a Non-Cute?. Sister trope to Realistic Species, Cartoony Species. See also All Animals Are Dogs.

The Waitpersons went through many, many, MANY goldfishes before they got Darwin. So many, that the last two goldfishes literally escaped when they saw him coming.

The Waitpersons went through many, many, MANY goldfishes before they got Darwin. So many, that the last two goldfishes literally escaped when they saw him coming.