Manga / Crimsons  The Scarlet Navigators of the Ocean 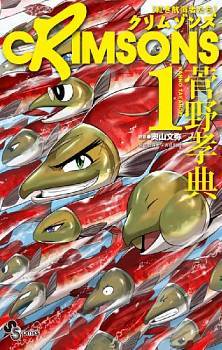 The one and only legendary sockeye romance!
Crimsons - The Scarlet Navigators of the Ocean is a Hot-Blooded shounen adventure manga about fish by Kanno Takanori.
Advertisement:

Yes, fish. It's better than it sounds.

The protagonist is Shintarou, a feisty Sockeye Salmon whose school lives on the fringes of a freshwater lake. Life is tough in the shallows and food is scarce; the interior and its bounty are ruled by a tough and greedy gang of fish delinquents called "The Fearsome Fins". Remembering a rumour he heard when he was but a fry, Shintarou leads his school up-river to the ocean in search of a paradise to call their own. Shintarou grows into a brave and resourceful leader as he guides his school on their quest, fighting for survival against deadly predators such as sharks and whales. Along the way, they are studied by a marine biologist and his Canadian exchange student, Kris. She has a crush on her professor, who secretly reciprocates but must reject her advances to protect his career and reputation.

Though the premise is unusual, it's surprisingly accessible and captivating, as the migratory life cycle of the Sockeye Salmon easily lends itself to such a narrative. Written under the editorial supervision of a professor of ichthyology at the Tokyo University of Marine Science and Technology, it contains a healthy dose of educational content about marine biology, though some artistic license is taken.

The manga provides examples of the following: