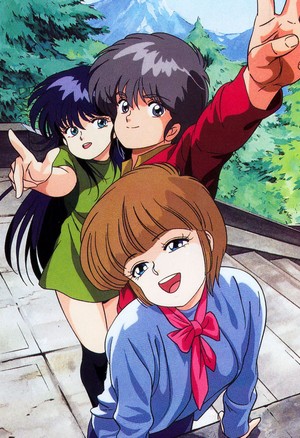 Kimagure Orange Roadnote Quirky Orange Road is a manga created by Izumi Matsumoto and serialized in Weekly Shonen Jump from 1984 to 1987. The anime had a pilot episode to promote the manga in 1985, which was followed by a 48-episode TV anime series which aired from 1987 to 1988, a TV movie from 1988 (Kimagure Orange Road: I want to return to that day), and 8 OAV's (set in the TV series continuity) released in between 1989 and 1991. There were also a theatrical movie set several years post-series (Shin Kimagure Orange Road: Summer's Beginning) and a Drama CD series from 1997.

The Love Triangle between the three main characters remains a classic to this day. At the center of it is Kyōsuke Kasuga, the apparently Ordinary High-School Student, whose family has just moved to another town due to the necessity of keeping their Psychic Powers a secret.

His first love interest is the beautiful Madoka Ayukawa, who seems to be a friendly and kind girl the first time their paths cross. When he meets her again at school, however, she acts icy and distant towards him, and school rumor insists that she is a delinquent. Which facet of Madoka is the real one?

The third corner of the love triangle comes in the form of Hikaru Hiyama. She's a bubbly, innocent tomboy who immediately falls for Kyōsuke after seeing him make an incredible hoop shot (not knowing that he used supernatural powers) and is fond of glomping him and calling him "Darling!"

Predictably, Kyōsuke has no romantic feelings towards Hikaru: he does care for "Hikaru-chan", but as a sister, eventually (although what 15 year old guy can really resist a cute girl practically throwing herself at him?), and has eyes only for Madoka, who acts sweet (but cold when he disappoints her because of his indecisiveness) towards him. Even more predictably, Kyōsuke cannot declare his love for Madoka or reject Hikaru and thus end the love triangle. The reason? Hikaru absolutely adores "Madoka-san" and has been her Only Friend from many years ago (as in, along with a boy named Yūsaku Hino, she's the only person who isn't afraid of her), and Madoka had already promised to help her win Kyōsuke. In addition, Madoka has shown she really dislikes it if Kyōsuke does anything to hurt or upset Hikaru. Of course, the setup gets even more tangled when Madoka herself begins developing feelings for Kyōsuke as well...

What elevates Kimagure Orange Road from a run-of-the-mill romantic comedy is the depth and genuineness of its emotions and events. Despite the subplot of Kyōsuke keeping his supernatural powers a secret, the series is really a coming-of-age story of typical teenagers finding their way in the confusing realm of love that feels more realistic and nostalgic than most other romantic comedies.

After AnimEigo lost the license in 2004, it was almost forgotten in Western anime circles, but Discotek Media announced on August 12, 2018 that it was going to release a remastered Blu-Ray of the series which was released on March 26, 2019, with the OVAs and first movie released on July 29, 2019. The TV Series, OVAs, and first movie can be watched on Crunchyroll.