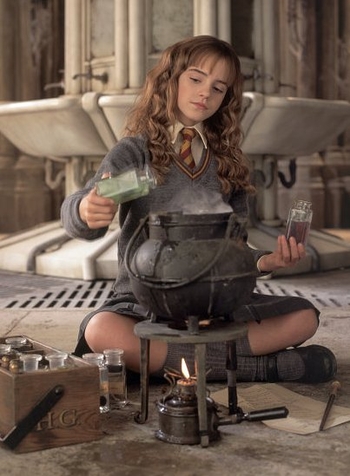 Stereotypically speaking, in fiction, blondes are lacking in intelligence, redheads have short tempers, so, out of the trio, brunettes are all brain. Outside of the trio, they will often be used as a Foil for the Dumb Blonde in either a Brains Versus Brawn or Brains and Brawn duo. Like the Dumb Blonde, the brunette varies quite a bit. They can bashfully hide behind their books or glasses, with their hair done in pigtails or a bun or they can boldly use their smarts for their ambitions. Whichever it is, their knowledge is real—if she's on your side, then you can always count on her smarts in a fix. She may be a Hot Librarian, a Hot Scientist, or even a Wrench Wench. If so, her Sesquipedalian Loquaciousness and/or Techno Babble will turn people on. And she always has nice, thick, brown locks. What they don't (necessarily) have is strength, like the Squishy Wizard (who may be The Smart Guy himself), as they care more about their mind than their body. That's what makes a Badass Bookworm so interesting, a rare combination.

This trope doesn't mean that blondes and redheads can't be the brains of the outfit. It's just more common for them to have brown hair, especially if they're female, although there are some male examples.

May overlap with Asian and Nerdy, Bollywood Nerd, or Black and Nerdy.

Contrast Dumb Blonde and Fiery Redhead. And, as with both of them, this character can be either good or evil. Compare Redheads Are Uncool who might stand out as much as the brunette but have less confidence than even the bashful brainy brunette.