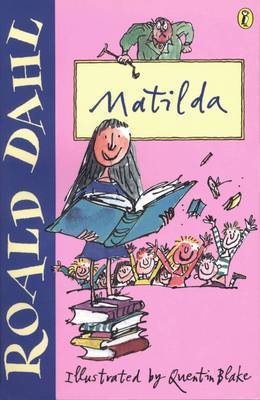 A Roald Dahl book about an exceptionally clever little girl, Matilda Wormwood, who has exceptionally horrible and ignorant parents. Matilda has a love of learning and books, and her parents think she is stupid and deride her for reading while they watch mindless Soap Operas and Game Shows.

The first half of the book deals with Matilda discovering how to use her intellect against her parents by playing tricks, like supergluing her father's hat to his head. The second half of the book pits her against a far more formidable enemy — Agatha Trunchbull, her school's sadistic headmistress, as well as introducing the only person to truly recognize Matilda's amazing talent, Miss Honey. Matilda ultimately has to pit her prodigious intellect (and newly discovered telekinetic powers) against the Trunchbull to liberate both the sorely oppressed children and her beloved teacher, as well as making a better life for herself.

In 1996 a film adaptation was made under the direction of Danny DeVito, starring Mara Wilson (Miracle on 34th Street, Mrs. Doubtfire) in the lead and a frighteningly accurate Trunchbull in the form of Pam Ferris.

In 2010, it was adapted into a stage musical, written by Dennis Kelly, with music and lyrics by Tim Minchin.