Literature / Me and Sam-Sam Handle the Apocalypse 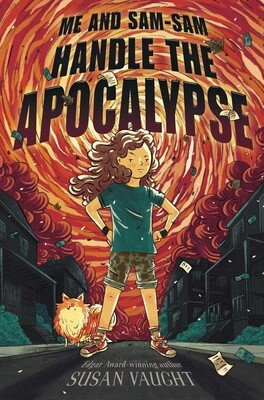 Me And Sam-Sam Handle The Apocalypse is a mystery novel by Susan Vaught.
Advertisement:

When the cops show up at Jesse’s house and arrest her dad, she figures out in a hurry that he’s the #1 suspect in the missing library fund money case. With the help of her (first and only) friend Springer, she rounds up suspects (leading to a nasty confrontation with three notorious school bullies) and asks a lot of questions. But she can’t shake the feeling that she isn’t exactly cut out for being a crime-solving hero. Jesse has a neuro-processing disorder, which means that she’s “on the spectrum or whatever.” As she explains it, “I get stuck on lots of stuff, like words and phrases and numbers and smells and pictures and song lines and what time stuff is supposed to happen.” But when a tornado strikes her small town, Jesse is given the opportunity to show what she's really made of—and help her dad.