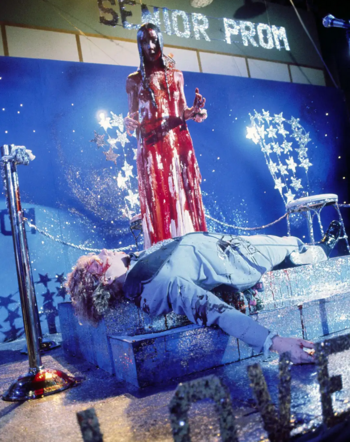 "That was when they all started laughing. I did too, God help me."
In fiction, prom is a special part of the high school experience. A magical night, that people will remember for years to come. At least for most people. Typically, there will be some characters who hate the prom for whatever reason. Usually they are social outcasts. Sometimes, they will try to take their hatred of prom a step further and ruin it for everybody.
Advertisement:

Often times this will involve an homage to Carrie, with the Prom Queen and King getting something nasty dropped on them. Related to RevengeSVP and Fun-Hating Villain, if the prom-wrecker is angry about not having a date or wants to prevent others from enjoying themselves. Can overlap with Ballroom Blitz. In extreme cases, this will overlap with Axes at School. Compare with Wedding Smashers. Nominated as a Prank will be a common tactic.

Note: Someone should be deliberately trying to sabotage the prom. If the prom is ruined because Alice accidentally pulled a fire alarm or Bob forgot to book a DJ, it doesn't count. This can also apply to school dances other than the prom.