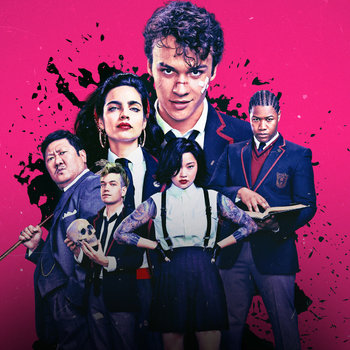 And you thought your high school was deadly.
Advertisement:

Deadly Class is a TV series that aired on Syfy from January to March of 2019, based on the comic book of the same name by Rick Remender and produced by The Russo Brothers.

At Kings Dominion Academy, kids from all walks of life learn important life skills, like the best poison to use if you want to make a statement, or the best way to dispose of a body. When Marcus is accused of killing the kids at a boys' home, he attracts the attention of the school's headmaster, Mr. Lin, who gives him a scholarship. There's just one problem - Marcus never actually killed anyone.

It only lasted one season and was cancelled in June 2019.