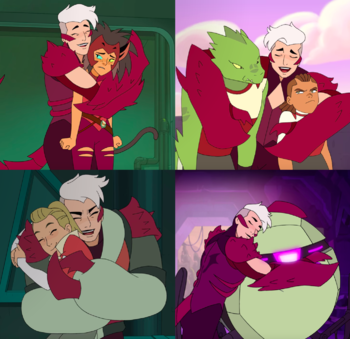 Physical intimacy is a basic human desire. Humans generally want some degree of physical contact. Then there are those who like it a little too much. These people are the type who like hugging and cuddling people, often delivering The Glomp. Combine a Cuddle Bug with a character who Hates Being Touched, and more often than not, Hilarity Ensues. A Clingy Child might be one if the cause of their clinginess is displaying affection to older parental figures.

Their skinship reaction is usually triggered by Moe and Cuteness Proximity. When taken to the extreme, it might result in the person declaring I'm Taking Her Home with Me!. For when the cuddling is done by a person who Does Not Know His Own Strength, see And Call Him "George". A character who is a Cuddle Bug and also has Cumbersome Claws can also cause trouble. Compare No Sense of Personal Space.