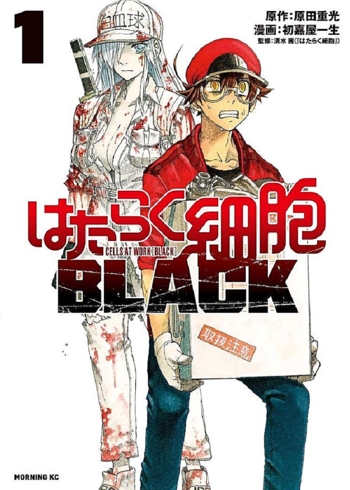 If your local PSA won't get you to quit smoking, this manga will.
We have to wipe out all foreign substances from this body to protect it! Work, work, work until you drop!
—Helper T-Cell Commander
Advertisement:

Cells at Work! is a relatively-lighthearted Anthropomorphized Anatomy story based on a hypothetical human body in generally good health, so most of the health issues described there are acute and are from external sources. But sometimes, the problems stem from the body itself. How about diseases due to poor life choices? How do your cells handle overexertion or hormone imbalance? What happens when the pathogens are on the winning side for once? What triggers organ failure?

That would be a bit too dark for a Shonen series, and too jarring for such a bright and cheerful world, so they set a spinoff to that effect in an older man's body instead.

Welcome to the daunting world of Cells at Work! CODE BLACKnote Originally released as Hataraku Saibou BLACK, or Cells at Work! [BLACK], where an unhealthy body is depicted as a Dangerous Workplace gone worse. In this landscape ravaged by bad habits, the cells inside have to deal with the effects of lethargy, unsafe sex, stress, smoking, and more — often in the bloodiest ways possible, whether they want to or not. Shigemitsu Harada and Issei Hatsuyoshi are in charge of the plot and art, respectively, making this the first installment done without Akane Shimizu's direct involvement. It ran in the Seinen anthology Morning from 2018 to 2021.

Kodansha Comics obtained the North American license for the manga.

An anime adaptation was produced by Liden Films, which started airing on January 7, 2021, alongside the second season of the original Cells at Work!.

Example of:
Devoured by the Horde