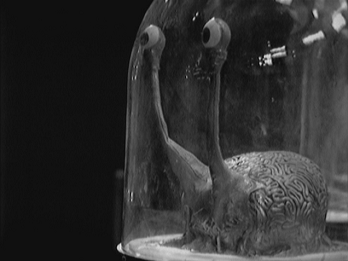 "Oooh, this seems interesting!"
"I don't believe that man was made to be controlled by machines. Machines can make laws but they cannot preserve justice. Only human beings can do that."
— The Doctor
Advertisement:

The one with evil scuba diver aliens.

Written by Terry Nation. This six-episode serial first aired from April 11 to May 16, 1964.

Back with science-based action this time, as the TARDIS arrives on Marinus, on an island of glass in a sea of acid. It turns out this island is the location of the "Conscience of Marinus", a mind-controlling machine that has been used for centuries to keep the peace. However, the villainous Yartek and his Voord warriors wanted to capture the machine and use it for evil, so the four eponymous Keys of Marinus without which the machine wouldn't function were scattered over the planet in secret locations.

Now Arbitan, the "Keeper of the Conscience" has rigged the machine so the Voords can't use it and the Doctor and companions must go and retrieve the Keys of Marinus so it can be switched back on again.

The Doctor and his companions are forced to play along. They team up with Arbitan's daughter Sabetha and her fabulously dressed boyfriend Altos. After adventures in a series of inventive locations (including a building under attack by ambulatory plants and a city in which Ian is accused of murder and finds that he's guilty until proven innocent), the travellers return with the Keys, only to find that Yartek has killed Arbitan. Yartek forces them to hand over the keys, but Ian passes him a fake one and the machine blows up in his face, killing him and the other Voords.