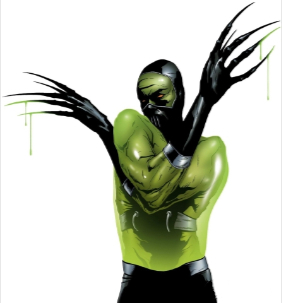 He just wants a hug.
"Watch your feet when you get in. There's acid on the floor."
—Dawn Hopkins,

There are some people no one wants to be around, either due to smarminess or poor hygiene (or both!) they seem to ooze from every pore and make the air around them noxious, and anyone they touch will feel like immediately disinfecting the area. For the Poisonous Person, that is exactly the case. They are lethal to touch because their body naturally produces universally lethal toxins, emits radiation or carries a host of dangerous diseases. Of course, they are immune to these hazards, but not so everyone else.

There are a lot of ways this can happen: falling into a vat of chemicals or bio-hazards, becoming Cursed as a Walking Wasteland or with an uncontrollable Touch of Death, or an autonomous deadly defense mechanism power that can't distinguish friend from foe. For extra angst (or yummies) the Poisonous Person kills those they touch because they must feed on their Life Energy.

This is one of those "powers" that are difficult to miss when they first manifest, sometimes resulting in a Dead Little Sister weighing on their conscience. Is it any wonder that they come to embrace Bad Powers, Bad People and become villains? Of course they probably weren't nice to begin with, since Poison Is Evil. This kind of villain isn't just difficult to fight, but also very versatile in applying their power. They'll use the sweat from their brow to salt a field, fill darts with their poisonous tears, turn a bloody wound into their enemy's demise by cutting themselves to poison their blade. Some of them may even have their poison be corrosive, if not throwing actual acidic stuff. Sometimes they may use radioactive poisoning. If their power is disease based, they make an excellent Plaguemaster. Or they might end up as a hapless Typhoid Mary.

If they aren't evil, they'll usually get far, far away from anyone who they might hurt, like a modern day Medusa or King Midas... sans gold. If they're really lucky they'll have enough control of their power/curse to turn it on and off, or at least be able to live in urban areas by wearing full body outfits or hazmat suits.

It's worth noting that there is no "typical" Poisonous Person in terms of appearance. Some are mundane looking, others are astonishingly obviously poisonous as Hazmat shows above, and a fair number are drop dead gorgeous. Why is it all the pretty things will kill you?

Not a Poisonous Friend (though giving a character both tropes would be all sorts of appropriate). Differs from Master Poisoner in that the master poisoner knows his way around toxins, although the two can overlap if the Poisonous Person is sufficiently smart and well in control of their own toxins. See also Walking Wasteland, Enemy to All Living Things, Technicolor Toxin, Brown Note Being, Plaguemaster, and Typhoid Mary.

Slitherwings are snake-like dragons that secrete poison from under their scales.

Slitherwings are snake-like dragons that secrete poison from under their scales.