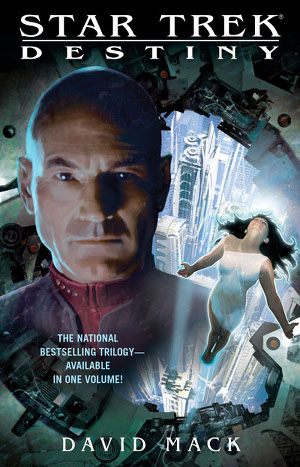 "This ship is the Federation's last line of defense, and nine hours from now we will have to hold that line, outnumbered by an enemy that doesn't negotiate, won't surrender, and never shows mercy. It's an impossible mission. Fortunately, we have some experience with those here on the Enterprise."
— Captain Jean-Luc Picard
Advertisement:

With the end of Star Trek: Voyager in 2001 and the flop of Star Trek: Nemesis in 2002, the canonical Star Trek franchise changed its focus from the 24th century back to the 22nd and, ultimately, 23rd centuries. The upshot was that the bleeding edge of the Star Trek mythos was completely abandoned... with, for the first time in decades, absolutely no new developments planned on the horizon.

Needless to say that the way was paved for a more active Star Trek Expanded Universe, where writers of novels were finally free to really shake things up and the status quo no longer held the sway it once did.

All of this culminated in late 2008 with Star Trek: Destiny, an epic novel trilogy by David Mack, detailing the final war between The Federation and the Borg Collective. After suffering one defeat after another at the hands of Starfleet, the Borg have finally decided to cut their losses and wipe out Humanity once and for all. To this end, they send an armada to the Alpha Quadrant using a network of interstellar tunnels, left behind by a Sufficiently Advanced Alien race. Things look bleak for Starfleet, but the wreck of a ship, lost mysteriously centuries earlier, may hold the secret to the Federation's survival.

The story is spread out over three novels (Gods of Night, Mere Mortals and Lost Souls). It fundamentally changes the Star Trek universe, and is well worth the read.

While it has been generally well-received, it should be cautioned that, as with all developments in the Star Trek franchise, opinions will differ. Major spoilers are found below.

This series is also notable as the main point at which the novelverse and Star Trek Online's continuity diverge for good: the all-out Borg invasion never happens in that game.