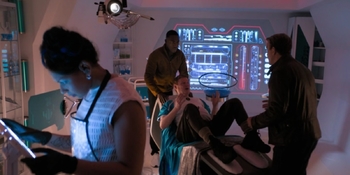 "May the saints of all the stars and constellations bring you hope, as they guide you out of the dark and into the light. On this voyage and the next, and all the journeys still to come. For now, and ever more."
Advertisement:

The one with the pregnant man.

This episode aired on November 4, 2018. Written by Chris Chibnall.

The Doctor, Ryan, Graham and Yaz are searching a Landfill Beyond the Stars for something with metal detectors, when Graham uncovers a sonic mine that's about to go off. Unfortunately, it can't be defused in time, and they all wake up in a hospital. Well, actually, it's a Tsuranga space ambulance, which picked them up after being alerted to their medical emergency via remote drones. It's bringing the Doctor, her companions, and two other patients to a hospital called Rhesus 1. The Doctor initially attempts to turn the ship around so she can get back to the TARDIS, but after the chief medic, Astos, points out that she's being selfish, she realizes he's right and stops. The ship is, however, having to take a new route on the edge of disputed territory to get to the hospital.

Just then, the ship is breached by something from space that moves incredibly quickly and targets the ship's two life pods. Astos dies when the life pod he enters is jettisoned, leaving them with no escape pods, since the other one was already gone by the time the Doctor got to it. The other medic, Mabli, is nervous about handling the situation on her own, and the Doctor calls the other patients together to tell them of the situation: a Pting, an extremely dangerous and mysterious creature which feeds on inorganic material, is onboard the ship, and they are all in danger if they can't get it off.

As the Doctor works to figure out what the Pting wants and get everyone safely to Rhesus 1, the other patients have their own problems: Yoss is about to have a baby he's not sure he wants to keep, and celebrated war hero General Eve Cicero is trying to hide the truth about her medical condition from her brother and everyone else. The Doctor eventually deduces that the Pting feeds on energy, so as Yaz and android Ronan defend the ship's antimatter core, and Graham and Ryan are roped into serving as Yoss's doulas (a real-world term for a non-medical assistant for a birth) while Mabli delivers his baby. The General sacrifices herself to fly the ship to safety through a quicker but more difficult and dangerous route, which her heart can't take. The Doctor feeds the ship's self-destruct bomb to the Pting, giving it a very good meal that should keep it from endangering anyone else for a long time, and the General's brother takes the ship home for the final stretch. At the end, as the ship is being decontaminated before everyone can be admitted to the hospital, they gather round to say a few words for General Cicero.