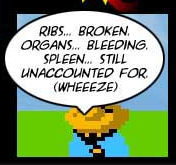 Emphasis on the "still".
"The spleen! Why is it always the spleen?!"
— Numerous

As far as human organs go, there is the common idea that no one knows exactly what the spleen does.

Therefore, a common sight in fiction is that either the spleen is a completely useless part of the human body or it serves some sort of encumbering function. Often Played for Laughs, especially with the implication that damage or loss of the spleen is trivial and harmless.

Because of the Inherently Funny Words effect, spleens are often mentioned for a punchline or joke. This mostly happens in an Arson, Murder, and Jaywalking manner, with the spleen as the jaywalking.

Along with the fact that it's seen as useless, the spleen is often portrayed as a convenient place to get hurt/injured in a fight, possibly because it is somehow considered funny.

In fact, the spleen plays a very important role in the lymphatic and immune systems. It is easily ruptured by blunt or piercing impact and is very difficult to repair (doctors say that it has the natural consistency of a blood-soaked sponge). If severely damaged, often it must be removed surgically or the person in question is likely to bleed to death; once removed, the person has to take care to avoid bacterial and protozoan infections (to which they become more susceptible). A fairly comprehensive treatment of the subject is covered in a blog entry by Dr. Scott.

Compare We Will Not Have Appendixes in the Future. Not to be confused with the useless Spleen.