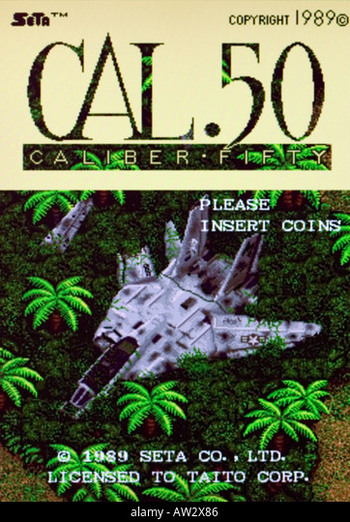 Caliber .50 is a 1989 Shoot 'Em Up action game made by SETA, available for arcade cabinets and the Sega Genesis.

Using a format lifted from Ikari Warriors three years ago, the game plays out like all run-and-gun games populating arcades at the time; you're a One-Man Army war hero with More Dakka and Bottomless Magazines, and you can collect assorted power-ups to facilitate your elimination of a literal army of faceless goons.

Set in what appears to be the The Vietnam War, the player(s), an American military chopper pilot, have their vehicle shot down and crashing in the South-East Asian jungles, right in the heart of enemy territory. Surviving the subsequent crash, realizing entire platoons of soldiers from the opposing side are coming for them, the player then grabs their downed vehicle's 50-Caliber automatic machine-gun and start shooting everything in sight.