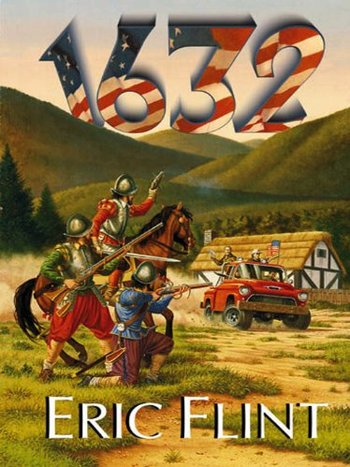 "I say we start the American Revolution — a hundred and fifty years ahead of schedule!"
— Michael Stearns
Advertisement:

In the spring of 2000, a small West Virginia mining town is taken back in time — land, people, resources and all — to central Germany in the middle of the Thirty Years' War. Mike Stearns, a miner and head of the local coal miner's union, convinces the townsfolk to open up, expand, and build a new society based on living up to the high ideals the US has always claimed to represent. Quickly realizing that they are screwed if they don't get some support — the local armies outnumber them by a considerable margin and are much more experienced in the ways of killing things — the people of Grantville ally themselves with the Swedish king Gustav II Adolf, also known as Gustavus Adolphus.

Unfortunately, the arrival of Grantville upsets the balance of power that Cardinal Richelieu, First Minister to King Louis XIII of France and the de facto leader of France, has worked so hard to engineer. A brilliant strategist, Richelieu quickly realizes the importance of the event termed the Ring of Fire and the implications of the historical and technical manuals found in Grantville's library and quickly sets about seeking to block Grantville's influence and using the knowledge of the future to make France the supreme power in the world.

Most of the novels in this series are collaborations, often drawn from the large pool of officially canon short stories written by other authors found in the Grantville Gazette

. The first edition of the first book may be read for free here.

note The second edition is not free, as part of the 2012 distribution deal Baen made with Amazon.com.

open/close all folders
Tropes A to C
Tropes D to H
Scaglia: Dear God, what a preposterous siege this has turned into. The chief diplomat for the besiegers setting up his domicile in the city besieged. What's that American expression? Charles V must be spinning in his grave.
Rubens: There are some precedents, actually. Not many, I admit. But that's always the advantage of being an artist, you know. People are willing to label my behavior as 'eccentric' when they need to look the other way.
Tropes I to O
Tropes P to R
Tropes S to Z