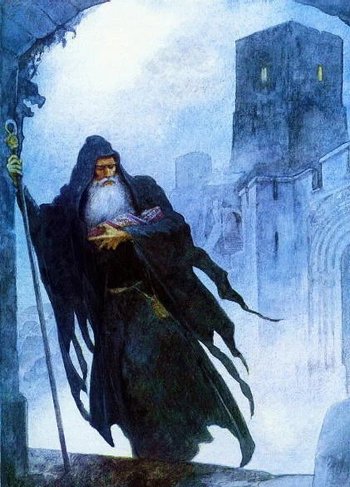 Before there was Dumbledore... before there was Elminster... before there was Gandalf... there was Merlin. The original bearded old wizard (unless you're counting Odin), this Public Domain Character was added to the Arthurian mythos around 1100 AD. Merlin — sometimes called Myrddin, Merzhin, or Merlinus Ambrosius in older sources — was the trusted advisor and surrogate parental figure to King Arthur.

In one legend, Merlin was intended to be an Antichrist figure, begotten on a virgin by the Devil. His mother, however, had the boy baptized at birth, freeing him from the Devil's influence. His demonic heritage gave him the ability to see into the past and future, a gift that is often carried over to myths that do not include this origin story. In other myths, his father is an angel, a fae, or even no one.

In most tellings of Arthur's origin story, Merlin's magic helped Uther Pendragon seduce and bed another man's wife (Igraine), leading to the conception of Arthur, whom he prophesized would be a great king. In return, Merlin was given the baby boy, who was fostered by a knight as his own son and later prepared by Merlin for kingship.

Merlin's final fate varies from telling to telling. In some recountings, he loses his wits when Arthur is slain. In others, he is tricked and imprisoned by the witch Niviane (or Nimue), whom he deeply loved and taught magic.

Merlin has appeared as a character in the following works: