Myth / The Lady of the Lake 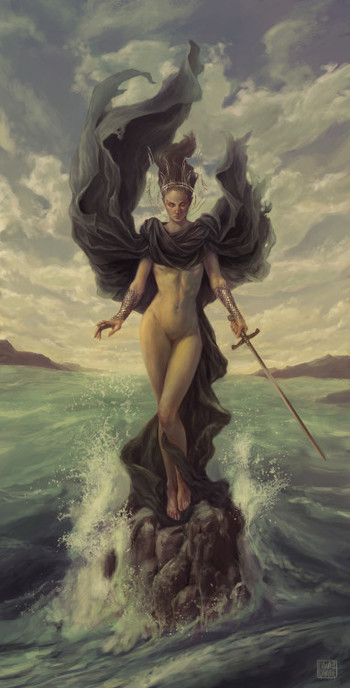 by Diana Van Damme
Arthur: But I thought you were a fairy.
Lady of the Lake: Oh no, that's Lancelot.
—Spamalot
Advertisement:

A sorceress of ancient Britain, she is best known for several different pivotal things, with the one character being put to use in so many different stories that the identity became separated. Also, despite how similar her name can be to Evian, the fertile spring in that French town was not discovered until many centuries later, so those etymology rumors are false. She is also not to be mistaken with the character Evaine, who she stole children from. However, sometimes she is also Morgan le Fay.

One of the earliest mentions of the Lady of the Lake is how she spirited away Lancelot from his family as a water fairy, raising him in the Lake in the Land of Maidens, which has parallels with Themyscira of Classical Mythology, and not the only connection. She is stated to have her beguiling powers over Merlin granted from the goddess Diana. The island is also similar to Avalon, too, though.

Later stories expand on this, telling how when Lancelot was an infant his parents' kingdom of Benwick was being pillaged and he was left on the ground whilst his mother Elaine (who is not one of the Elaines he sleeps with) was healing his father, and the Lady of the Lake swooped in to carry him away. Additionally, Evaine's children were kidnapped by a knight doing the pillaging and then spirited them (Lionel and one of the Bors') to this mystical land, too. For a few years, Elaine is miserable and has joined a nunnery with her sister Evaine, but they are given a vision of their children's happy childhoods. It is assumed that the Lady of the Lake was on the side of those doing the pillaging, or may have initiated it with a desire for children. This is also why Lancelot's surname is "du Lac", and it is the Lady who sends him to Camelot.

In some French Chivalric Romance poetry, the Lady of the Lake (here Viviane) is like a godmother to Lancelot and also has a backstory of her deceit of Merlin. She plays Merlin and says she'll trade love for his secrets, though he foresees that when she's got what she wants she will trap him in either tree or stone; he has to do it, though, and does end up trapped. Another French cycle has a similar story of Ninianne, but also adds the part about her giving Excalibur to Arthur. These are clearly the same person but transliterated in Le Morte D Arthur as the Lady of the Lake and Nimue, separate characters, with it being the first one who gives Arthur the sword, instead. This Lady is also beheaded by Sir Balin. Both are expanded upon in folders below.

Other stories of the Lady of the Lake include the Franz Schubert pieces in the style of an early Concept Album, of which "Ellen's gesang III" is best known now as the "Ave Maria". It is based on a poem

by Walter Scott that sets the romance in Scotland. Alfred, Lord Tennyson also adopted a version, splitting the character again into the evil Viviane and virtuous Lady of the Lake. This is the style often repeated in stories borrowing the characters, several of which are listed on this page.

See also the tropes Enigmatic Empowering Entity, which used to be known as The Lady of the Lake and still has the alt title Empowering Lake Lady, Excalibur, and Merlin and Nimue. 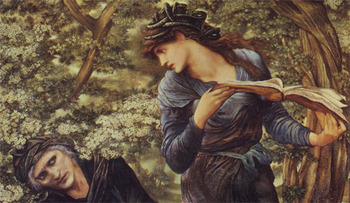 by Edward Burne-Jones
a.k.a. the French Lady of the Lake, based off early Viviane in the Lancelot-Grail cycle but called Nimue by Thomas Malory.

The Nimue incarnation of the Lady of the Lake is possibly the most interesting, with many more works featuring her and much more academia written on her. Her first appearance in L'Morte d'Arthur is at Arthur's wedding and at the time when the Chivalric code is being changed, which is blatant symbolism that she's going to bring change in the status quo, and one to do with love. She's kind of a bonus background character for a while in various stories until she gets her own, several times she does provide aid for Arthur and the knights on their various adventures before popping back out. It's interpreted that Malory also uses her popping-in-and-out appearances to make it clear that the character is rejecting the fame that her role could have (due to the stories exceeding in popularity), something parodied magnificently in Spamalot.

Regarding taking Lancelot as a child, this is sometimes justified in that she knew the pillaging soldiers wouldn't be very kind to him and she could, but also made worse because in this cycle she is often Queen of Sicily who controls the court, so it would have been her decision to sack Benwick in the first place. Obviously, because of the whole husband thing in these cycles she takes them back to court rather than the Land of Maidens, but still has the lake so it all works out. However, she is best known for the story of Merlin and Nimue.

In this, after saving their asses several times she gets to become student under the great wizard Merlin, and is an eager student. However, she is enchanting in the beautiful and interesting sense (sometimes deliberately, sometimes not) and Merlin comes to love her. In some versions, Nimue does return this affection but still manipulates Merlin to "steal" all his knowledge; in others, she does not return the affection and either coldly uses it against him or just wants the old creep to leave her alone. Merlin foresees an event in which she traps him in a stone/tree/cave after she has had him tell her everything, and resigns himself to this as a combination of knowing that what he sees must happen and being too enamored to even come up with a way to set it up so that while the vision will happen he can still escape or trick Nimue into thinking she's had him reveal all before he has. Sometimes he dies, sometimes he becomes part of nature.

She then takes Merlin's place as the magical person at King Arthur's court and lives happily ever after with Pelleas (at least for a short while). In most of these stories, she is among the queens who deliver Arthur to Avalon after he is mortally wounded. She then reclaims Excalibur when Bedivere throws it into the Lake, sometimes being depicted as returning to her place as before she had given Arthur Excalibur, waiting like him until it can be wielded once more.

She has various other character traits, which are all positive. She is also often a divine emergency sensor because whenever Arthur is in trouble, she'll get to him with the help he needs. Like Dora's backpack, but a water fairy goddess queen.

Post-Vulgate/Sir Balin, the Knight with the Two Swords Legend 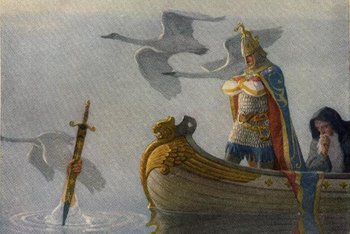 This Post-Vulgate Lady of the Lake started the image of holding Excalibur above her head out of the water, and she makes Arthur owe her a favour if he takes it. When she comes to collect it, she asks Arthur to behead Balin because he killed her brother. Arthur says no, he'll do something else, and she asks for him to behead a certain maiden, sometimes cited as Guinevere but typically a girl from Avalon who accidentally provides Balin with a cursed sword, because the maiden caused her father's death. Balin hears this and reconciles this story with one from a woman who had his own mother put to court, swinging the cursed sword and beheading the Lady. He tries to justify this, but Arthur doesn't really care for the story, and it's especially feeble since some of her more damning acts had already been transplanted to the girl from Avalon.

Balin becomes banished (again) but is reinstated when Merlin explains that the girl from Avalon is actually a French princess who enlisted the help of Lily of Avalon to enact a cosmic revenge (which ultimately becomes getting Balin to kill Balan, not that she cares for the details). Though this doesn't seem to justify killing a completely unrelated woman, Merlin and Arthur agree that since the sword is cursed then Balin couldn't help it. There may also be some reasoning related to Excalibur that doesn't seem to have been passed down very well, but the sword is also cause for dispute between the Lady and Balin.

The Lady of the Lake provides examples of: