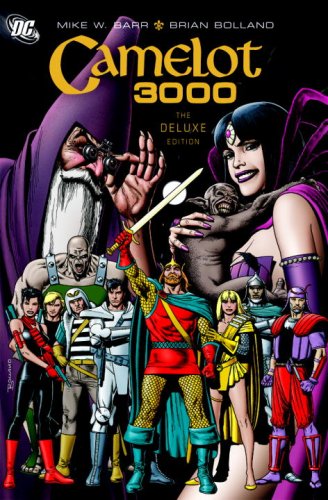 Camelot 3000 is an American twelve-issue comic book series written by Mike W. Barr and penciled by Brian Bolland. It was published by DC Comics from 1982 to 1985 as one of its first direct market projects, and as its first maxi-series.

The plot of the series follows the adventures of King Arthur, Merlin and the reincarnated Knights of the Round Table as they reemerge in an overpopulated future world of 3000 A.D. to fight off an alien invasion masterminded by Arthur's old nemesis, Morgan Le Fay. Arthur is awakened accidentally from his resting place beneath Glastonbury Tor by a young archeology student, Tom Prentice.

Notably, because of its position as a maxi-series, Camelot 3000 was able to circumvent the Comics Code and feature more adult content than previously allowed in a comic and included then controversial themes on gender identity and sexuality via the reinterpretation of Sir Tristan as a trans character.

Despite its standing in comic book history, the series is not terribly well known, but highly recommended.