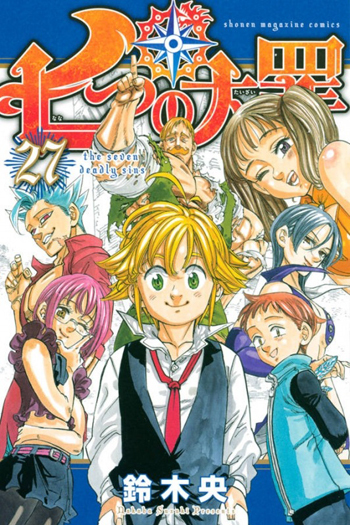 The Seven Deadly Sins (Nanatsu no Taizai) is a fantasy adventure manga about the land under a terrible tyranny brought about by the Holy Knights, who have taken control of the land and are making life miserable for everyone. Elizabeth, princess of a kingdom conquered by the Holy Knights, has traveled the land looking for the only group that might be able to defeat the Holy Knights, seven knights thought dead, feared throughout the land for their great and terrible power... The Seven Deadly Sins. The Sins are presumed dead after they had apparently tried to overthrow her father the king.

To her surprise, Elizabeth finds one of the Sins, Meliodas, the Dragon's Sin of Wrath, happily running a tavern, and he is nothing like the stories say (he doesn't look anything like his wanted poster, for one thing)... save that he is incredibly strong. At Elizabeth's request, she and Meliodas go on a quest to find the six remaining Sins. However, the quest will not be easy, as the Holy Knights are hunting for the Seven Deadly Sins, and Elizabeth as well, and will go to great lengths to capture or destroy them.

Has a characters page.

The manga is by Suzuki Nakaba (who also created Kongoh Bancho), and it was serialized in Shōnen Magazine from 2012 to 2020. It has been released in English by Kodansha Comics. It was later confirmed

that the series would have an anime adaptation by A-1 Pictures. It began airing on October 5, 2014, and ran for two cours (24 episodes). The anime was licensed and dubbed by Netflix as one of their "original" shows, premiering on November 1, 2015, with Funimation acquiring the home video license in 2017.

A second season of the anime was announced,

but then encountered delays

, rumored to be to allow the manga time to finish a required arc or two. The anime ended after five seasons, a sidestory movie, and an epilogue movie on October 1, 2021.

The series spawned several SpinOffs including:

A sequel series titled Four Knights of the Apocalypse began serialization on January 27, 2021.

The Commandment of Truth

Galand is the wielder of the Commandment of Truth; any who lies or breaks any vow in his presence is turned to stone as punishment.

The Commandment of Truth

Galand is the wielder of the Commandment of Truth; any who lies or breaks any vow in his presence is turned to stone as punishment.