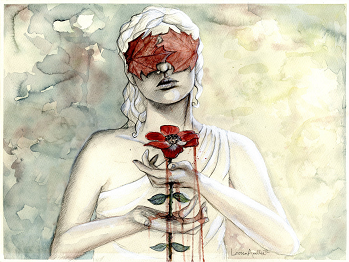 Blood signifies life. Some blood, however, is more than just a symbol. When it is spilled, life springs forth from the ground. This is usually plant life, but sometimes creatures are born from it, too.

Related to Fertile Feet, Mook Maker, and sometimes both. Commonly seen on Eldritch Abominations, demons, or those with a Green Thumb. Subtrope of Blood Magic and The Power of Blood. Fertility Gods (especially darker interpretations) may possess this trait as well.