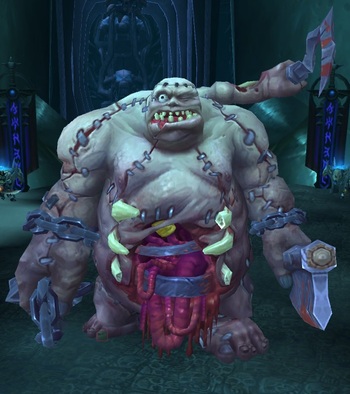 Now with 65% more body per body!
"Okay, so, just to be clear, this... this big fleshy spider thing that hurt El, it's some kind of gigantic... weapon? But instead of, like, screws and metal, the Mind Flayer made its weapon...with melted people."
—Steve Harrington, Stranger Things
Advertisement:

A trope pretty heavily influenced by Frankenstein's Monster but nonetheless quite distinct from the former in that, whereas Frankenstein's Monster usually has a humanoid appearance (barring the Uncanny Valley and various body parts belonging to different people), a flesh golemnote Trope Namer: Dungeons & Dragons need not look normal in the slightest.

If this creature is even vaguely humanoid, it may look like a nightmare version of conjoined twins, or it is a hulking abomination made of various parts of human flesh, sometimes skinless, often possessing extra limbs, organs and heads where they really shouldn't belong. Unlike Frankie expies, which tend to be of human-level intelligence or slightly below average, flesh golems don't usually have any intelligence to speak of — despite being made of human beings they are essentially robots only capable of obeying simple commands.

A popular type of golem, it can also be a Hybrid Monster if its parts belong to living beings of different species. See also The Worm That Walks for creatures made of live insects. See also Mix-and-Match Critters, Mix-and-Match Man, and Bio Punk. For a Science Fiction equivalent (involving some form of Artificial Intelligence, rather than spirits and/or animating magic operating such a being) see Meat-Sack Robot.