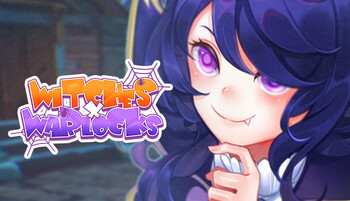 Witches X Warlocks is a fantasy Dating Sim created by Nifty Visuals, released via digital distribution for free on November 1, 2020. The player takes the role of Fay Nightshade, a matchmaker who has put off studying for far too long and now requires the assistance of three (four in the DLC) romanceable characters to help them pass their exams.

The love interests are: