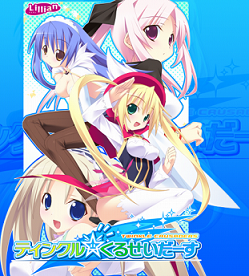 Synn Sakura, our hero, a second-year in Ryuusei Academy, becomes the Student Council President through sheer dumb luck. His sole reason for joining is to have free food. Unfortunately for him, there's no such thing as a free meal. Also, part of his new job is to fight the Mazoku invading the town. Joining him in the student council are second-year Childhood Friend Nanaka Yugiri (the accountant), first-year Cloud Cuckoo Lander Lolotte Rozenkreuz (the secretary), second-year Tsundere Misa Brigitta Cristelis (the vice-president), and former Student Council President, third-year Ria Kujoh. The cast continues with other major characters, like the mysterious Transfer Student second-year Azel or the seven most powerful demons that make up the 7th General.

Twinkle Crusaders is a Visual Novel created by Lillian

, released in September/October 2008. It was originally an eroge known for its turn-based strategy-like battle system, which was expanded upon from the once-unrelated, but as of recently, overlapping) visual novel, Princess Witches (by Pajamas Soft).

In September 2010, it was ported to the PSP, called Twinkle Crusaders Go Go!, with an improved battle system and a new original character. An expansion, Twinkle Crusaders STARLIT BRAVE!!, adds 10 more characters, half of which are from anime/manga, the other half from other visual novels, and all of which are Dengeki G's character cameos.

A fandisk called Twinkle Crusaders -Passion Star Stream- released in February 2012 removes the previous cameo characters in favor of adding more original characters, as well as adding cameos of the Princess Witches cast. Prior to this release, two versions of a web trial were released, which gave a sneak peek of the upgraded battle system, as well as seeing the Princess Witches characters in battle. The first release, called Twinkle Crusaders -Passion Star Stream- Battle Trial Edition, was released in September 2011. The second release, called the Battle Trial Final Mix Edition, was released on New Year's.

The full game of PSS consists of four parts:

Furthermore, an expansion of the expansion, Twinkle Crusaders STARLIT BRAVE XTREAM!!, was released along with the above-mentioned PSS. Unlike PSS, this is purely a game focused on the battle system, having no plot whatsoever. The roster includes the original, Go Go!, and PSS casts, as well as the Dengeki G cameos from SB, the ones that originated from visual novels (but unfortunately, not the anime/manga side). Two (technically three) more visual novel cameos also show up as guest characters. This game also comes with three modes: