Visual Novel / Without Within 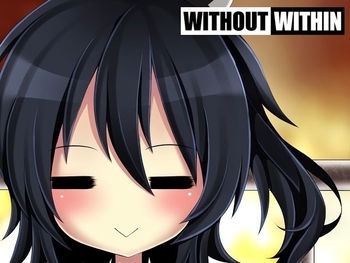 A crowd of hundreds raised their cameras as soon as I stepped out. My guards waved their arms to shoo them away. This red carpet was for me to walk on, after all. I blew a kiss for these starstruck peasants.
Advertisement:

Vinty is adored by everyone for her world-famous calligraphy work.

Or at least, that's what she wants to think. In reality she spends days sitting out on the street trying to sell her calligraphy with no success, has to deal with street trolls, and has a part time job that she hates but puts up with so she can pay her Cranky Landlord.

Without Within is a Ren'Py-based indie Visual Novel free for download on Steam, made by InvertMouse. There is also a sequel, Without Within 2, where Vinty is invited to a calligraphy gathering in Melbourne, Australia and meets a famous calligraphist, Excelia.

Tropes for Without Within: