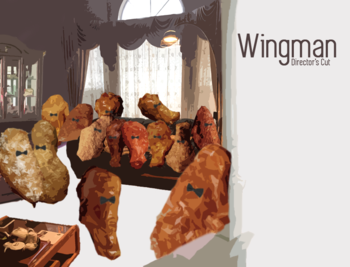 Welcome to Wing Academy for the Soon-to-be-Delicious!
''I will not forget your tasty flavor. Soft and tender skin all over.
Our youth spent together.
Fried chicken is my love."
Advertisement:

Wingman DX is a Ren'Py-based visual novel set in Wing Academy for the Soon-to-be-Delicious, an academy where wings learn how to become more delicious and appealing to humans and find their Soulmouth. You play as a human admitted to the academy on scholarship as part of a work-study where you are simultaneously expected to be a full-time student and also help teach wings what humans find attractive. Throughout your time at the school, you meet fourteen eligible hot wings, each with their own issues to work through.

The eligible hot wings are:

The game is downloadable on itch.io

and its official Tumblr

Not to be confused with Hatoful Boyfriend.