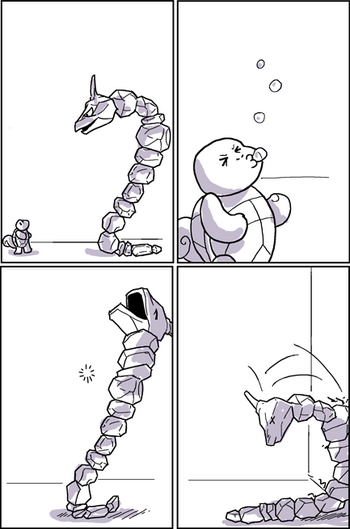 This is why it pays to have a Metal Coat.
A monster whose massive, terrifying appearance is offset by such a massive, terrifying handicap that it rarely presents any actual threat at all. Essentially, they're regular Mooks, just bigger (and slower, much slower). Later, you may encounter fully-powered versions of the Fake Ultimate Mook, or you may fight many of them at once, but a single one is of minimal threat.
Advertisement:

For actual bosses, see the Warm-Up Boss and/or Anticlimax Boss.

Compare and Contrast with Giant Mook, which is usually proportionally stronger because of its size, but will sometimes become the Fake Ultimate Mook instead. Also contrast the Boss in Mook Clothing. Polar opposite of the Killer Rabbit, which is an extremely cute or otherwise harmless-looking creature that will grin and hand you your ass if given the opportunity. When it comes to Mooks, its opposite is Invincible Minor Minion. Compare Surprisingly Easy Mini-Quest for other situations where a tough fight or problem gets resolved with surprising ease. Subtrope of Paper Tiger.