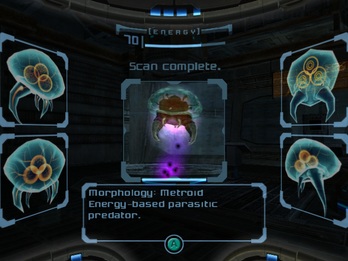 An item, ability, or spell that when used provides the player with otherwise hidden information about the current enemy. This will often reveal the enemy's Hit Points, Mana Meter, attacks, weaknesses (in RPGs, especially magic-based ones), or may just provide a general description of the enemy. Often shown in the form of Stat-O-Vision, even if it's a magical spell.

Some games feature a Monster Encyclopedia of sorts that may be filled if the player wants 100% Completion (in turn requiring the player to traverse the world and perform this on every single enemy). Frustratingly, this can result in Permanently Missable Content if the enemy (or a specific variation of it) only appears a limited number of times.

This may or may not work on bosses, especially the Final Boss. But it usually does work on Helpful Mooks.

Can become a Useless Useful Spell if it can only scan weak enemies you don't need to know much about to defeat.

See also Robo Cam, where a shot is filmed from a robot's point of view, often used when the robot performs an Enemy Scan. Also compare Sherlock Scan, where the information isn't hidden but is so subtle and obscure that interpreting it requires a special mindset.