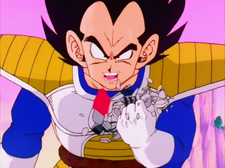 There are over 9000 memes in Dragon Ball. Some examples:

Zamasu: The internet is beautiful! But the ugliness of memes soils that beauty.