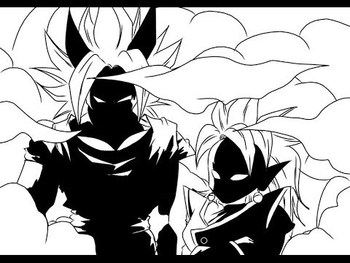 "I am Xicor, I am the heir of my father Son Goku, the mightiest in the universe!"
— Xicor
Advertisement:

A long time ago, Dragon Ball GT finished. After that, the Dragon Ball franchise didn't receive any more stories about Son Goku and his friends. Fans didn't like that, so they started to create rumours about a future series that took place after the future of Dragon Ball GT. The fans called it Dragon Ball AF.

Of course, Dragon Ball AF was actually based on a fake Super Saiyan 5 transformation

Still, many fan comics were created based on the Dragon Ball AF idea. One of them was done by Toyble around 2006. Toyble adapted the story after the end of GT, with the villain of Xicor, a clone of Goku created by the now evil Supreme Kai of the West, which was thought to be previously dead in Majin Buu's rampage of the Supreme Kai world.

Many years later, Toyble would be known as Toyotarō, the man hired to work with Akira Toriyama on the manga adaptation of both Dragon Ball Heroes and Dragon Ball Super.

While this story obviously is not part of the Dragon Ball continuity, it is an important piece of background for one of the members of the Dragon Staff, with some elements making their way into the series.