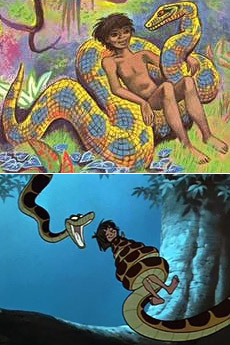 Kaa in the original book vs Kaa in Disney's adaptation.
"As many people have noted throughout the years though, Disney has been rather... lax when it comes to adapting books and fairy tales into movies. This is understandable in some cases. Still, it can be a bit galling when one knows that the fire-breathing, demonic witch on the screen was a kindly old lady in the source material."
— Top Five Miscast Disney Villains

The villain of an adaptation or retelling of a story is a familiar character who wasn't as bad in the source material. Sure, they may have been a bit of a jerk, or couldn't care less about the good guys, but they weren't evil. Maybe they were even an ally of the main characters who leaned a little too far on the evil side, or a villain with standards or who was known to show a softer side. Maybe the character rubbed the heroes the wrong way, but never caused any real harm and was otherwise a decent person. In any case, the character seriously Took a Level in Jerkass in the P.O.V. Sequel, The Movie, The Film of the Book, or any other reimagining of the original material. Where they were simply a pest before (and never treated as anything worse than that), or even friendly, they now kick dogs for fun.

This trope can take several forms, depending on the adaptation and the character. The True Neutral figure is actively villainous instead of simply not caring or choosing not to get involved. An imposing and potentially dangerous, but ultimately helpful, ally may become an enemy instead. The Anti-Villain and Tragic Villain will probably lose most or all of their sympathetic side and have fewer, if any, nicer moments. The Jerkass companion who is merely contemptible (but still entitled to the same protection as any other non-villain) in the source material will start committing acts in the adaptation that make them an actual enemy. The dangerous but tragic Woobie, Destroyer of Worlds will lose any sympathetic parts of their characterization or backstory, and the Noble Demon will lack most or all of their code of honor. Meanwhile, the Well-Intentioned Extremist's belief that they are doing the right thing is gone, and they do evil things just For the Evulz, even saying so. Sometimes it can be as simple as ignoring a reformed character's Heel–Face Turn or The Atoner's remorse over their past bad behavior. An Unintentionally Sympathetic character or a Designated Villain in the source material may also be given a Kick the Dog moment or two to make the character more obviously vicious and prevent the audience from feeling too sorry for them.

This occasionally happens to characters who were explicitly good guys in the source material, and if it does, it's sometimes a Take That, Scrappy! or to make the character Darker and Edgier. It may be a sign of Character Exaggeration. It can also be done to preserve a twist in the original story by surprising the audience with the identity of the villain, using an unexpected character as opposed to the original villain, who turns out to be innocent in the adaptation.

This isn't always a bad thing, however, and indeed some iconic villains have come about in this way, although it will probably lead to accusations of Adaptation Decaynote note that since this just means the adaptation being different from the original, it's technically correct by definition and isn't inherently a negative thing or Character Derailment from purists. Sometimes is the result of Composite Character — the composite mixes the harmless character and a more villainous one — or Adaptation Expansion, when there is no obvious villain in the original work, and a Ghost or another minor character gets the part. Sometimes it's to make the moral lines of an otherwise edgy story more clear or to simplify a complex character. A Perspective Flip often uses this deliberately along with Adaptational Heroism to subvert the audience's expectations of who the hero and villain are. If the adaptation does well, the darker incarnation of the character may become more popular and eventually overshadow the original, for a variety of reasons.

It's not Adaptational Villainy if an entirely new character is created to be the villain. This trope only applies if the villain in question is recognizable from the original work, but was a more sympathetic or tragic figure, had some form of standards or sympathetic motivations, had sympathetic moments or people that the villain genuinely cared about, was strictly neutral, was eventually redeemed, showed remorse, or wasn't evil at all. It is also not Adaptational Villainy if a character is Flanderized into being more outright evil than they originally were within a canon, their original, more understandable motives behind their actions are downplayed or completely ignored as the material goes on, or if constantly switching sides is an established character trait.

This trope is Older Than Dirt, since this sometimes happened to religious or mythological figures who, over time, became more malicious than they were in the older versions of their myths due to displacement or conquest, hence the Super-Trope Demonization. Also a subtrope of Adaptation Personality Change. Compare Everybody Hates Hades (when this trope is applied to certain Dark Is Not Evil gods in mythology), Historical Villain Upgrade (a variant for Real Life figures), Ron the Death Eater (when a section of a fandom demonizes a character rather than one specific adaptation) and Adaptational Jerkass (where the character becomes more unpleasant in the adaptation, but does not necessarily change alignment). Contrast Took a Level in Jerkass, in which the character becomes more unpleasant canonically because of Character Development and Adaptational Sympathy, in which a character's initial villainy is portrayed in a softer light..

For the inverse where a villain or Anti-Hero is softened in the adaptation, see Adaptational Heroism.

Example subpages (the medium is the adaptation's):