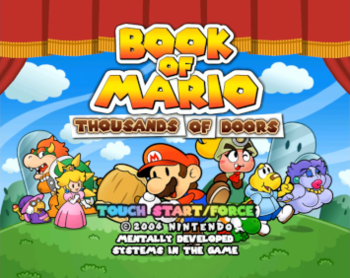 And this is only the title screen.
You will regret everything!
—Carbon

Book of Mario: Thousands of Doors is an unofficial Recursive Translation patch of Paper Mario: The Thousand-Year Door by Fatguy703. After getting a letter and a magical card from Princess Peach, Mario sails to the city of Rogueporto to find her. However, when Mario arrives, Peach is nowhere to be found. At the advice of Honesty Professor Caesar Reality, Mario journeys across the land and gathers the Crystal/Christian/Glass Stars, while a Great Offscreen War lingers in the background.

A bit over a year later, Fatguy703 created another unofficial patch to cover the game's predecessor, Paper Mario 64. The story starts similarly to the base game, but soon takes a dramatic turn away from it, eventually showing the start of the War from Thousands of Doors and the unexpected role Mario plays in the game's events.

Fatguy703's Thousands of Doors streams can be found here

But the truth is, I'm gonna trope my father. Him. All.