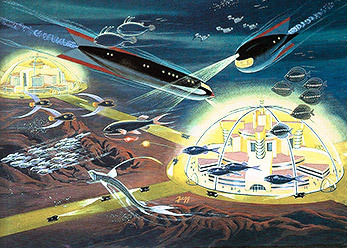 Complete with sea-floor highways!
"It seemed a sure bet that by the early '70s we'd be flipping a coin as to whether we'd be spending our holidays on the Moon or at the Poseidon Hilton on the bottom of the Caribbean."
— Tales of Future Past

Not just Underwater Ruins or an Underwater Base, but an entire city of people living and "breathing" underwater. It's usually created with futuristic technology or powerful magic, and a popular depiction is to have a fully surviving Atlantis with domes and/or water breathing Fish People or Apparently Human Merfolk. Similarly, these cities may crop up as a way of surviving in a Flooded Future World. Usually, though, it's a modern attempt at colonizing the ocean floor, or a villain's secret lair.

As might be expected, living in such a precarious location makes these cities inordinately prone to having something go horribly wrong, be it sabotage causing the dome to break, an undersea volcano activating, or other disasters.

See also City on the Water for cities atop the water instead of underneath.