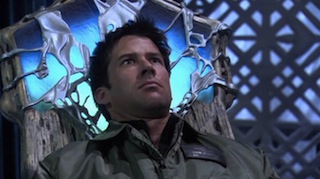 At the SGC's Antarctic research site, where most people seem to be concerned with getting the furniture to glow, Daniel Jackson has just found the fabled Lost City of the Ancients. It's in another galaxy! (Which is why they haven't been able to find it before). While Daniel persuades O'Neill to authorize the use of Earth's ZPM to power the gate to make the journey, the rest of the cast discovers that O'Neill's pilot, Major John Sheppard, can make the furniture glow — that is, use Ancient technology — better than anybody else. This makes him a must-have for the mission, even though he only heard about the Stargate this morning.

Heading the risky one-way mission into the unknown is civilian Dr. Elizabeth Weir, who had replaced General Hammond at the SGC, and was given Antarctica as a concession prize when she stepped down in favor of General O'Neill. Under her are Colonel Marshall Sumner, USMC, and Dr. Rodney McKay. And a lot of other people who may become relevant. When the MALP reports breathable air, and after being repeatedly warned that this is a one-way trip, they all step through the gate into darkness.

As it turns out, the Lost City of Atlantis is surprisingly well-preserved. And it seems to like them, since it starts turning on lights everywhere. And it's under water! These last two turn out to be a major problem, as McKay soon discovers that the city is almost out of power, and the effort of keeping them alive is weakening the force fields holding back the sea. Even worse, an Ancient recording reveals that the city was ultimately abandoned by the Ancients and sunk for safekeeping after they had their butts handed to them by a sinister alien race just as powerful as they were. Well, crap.

The power issues, however, are the more immediate concern. Colonel Sumner leads a team through the Stargate looking for any help that might be found locally — that is, in this galaxy. True to their Stargate heritage, they find themselves on a world that looks suspiciously like British Columbia. Sheppard befriends the local people, especially a woman named Teyla, who tells him about a sinister alien race called the Wraith, who have periodically abducted and/or massacred people throughout their history. In the morning, they discover a nearby Ancient city, where they hope they might find a replacement ZPM. Teyla warns Sumner that if anyone enters the city, the Wraith will come. Naturally, they explore the city anyway. And the Wraith come.

The Wraith zoom around and teleport up a bunch of people, including Teyla and Sumner, before retreating through the gate. Luckily, another member of the team, Lieutenant Ford, manages to catch six out of the seven symbols in the gate address. Ford and Sheppard evacuate the remaining natives, whose village has been utterly destroyed, through the gate to Atlantis. This is the last straw for the failing ZPM, and the force fields collapse, drowning the city forever.

Haha, no. When the force fields no longer have the power to hold back the sea, instead of everybody dying, the city suddenly returns to the surface, where the inhabitants encounter sunlight and breathable air. Even better, with the force fields gone, the Naquadah generators the humans brought with them are sufficient to power the entire rest of the city. They no longer have any cover or defense, of course, but it's not as if there's a sinister alien race waiting to suck out their very life.

With the power back on, Weir reluctantly authorizes a rescue mission for the people taken by the Wraith. Unfortunately, the Wraith gate seems to be floating in space. Fortunately, Atlantis just so happens to have a handy supply of Gate Ships Puddle Jumpers capable, like all Ancient technology, of responding to Sheppard's mental commands. And they can cloak! With success therefore assured, Sheppard, Ford, and their team head off to assault the Wraith homeworld.

Meanwhile, the Wraith have been treating their captives to like dinner. Colonel Sumner is taken to a female Wraith, who offers him lunch… at a table whose other diner is a withered horror-struck corpse. She is bemused by his lack of willingness to give into his hunger — and also by his lack of familiarity with the Wraith. She manages to drag the name "Earth" out of him, but is unable to discover the location of this "rich new feeding ground" even with torture. So she settles for sucking the life energy out of him with a tiny mouth on the palm of her hand.

Sheppard and his team make it to the planet and find and rescue the remaining humans without difficulty. Sheppard then proceeds alone to find Sumner, who is already in the process of becoming Wraith lunch. When bullets fail to seriously inconvenience the Wraith, he instead shoots Sumner, who is too far gone to save. He, in turn, is rescued by Ford, and manages to impale the female Wraith on a particularly pointy Wraith weapon. It does the trick, but as she dies, she reveals that only a handful of individuals have been terrorizing this galaxy for time immemorial; the rest of the Wraith have been in suspended animation, with her as their caretaker. Now that she is dead, they will wake up. All of them.

Sheppard and Ford flee back to the Puddle Jumper as all around them the sleeping Wraith begin to stir. They blast through the Wraith ships defending the gate, and make it triumphantly back to Atlantis, where Sheppard is now the ranking military officer, having just shot his immediate superior. There is general rejoicing, despite worries that the Wraith problem has just been made much much worse, and McKay discovers, to his horror, that his dinner contained lemons.