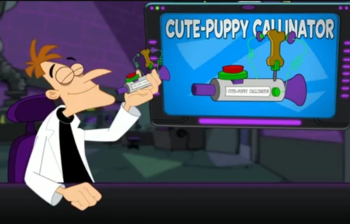 Take a wild guess at what it does.
JJ: Can you two make a device capable of tracking time trails?
Andy: How?
Casey: You make no sense.
JJ: OK, then can you make a "time-trail-track-O-mat"?
Andy: Totally!
Casey: We'll be done by lunch!
— Casey and Andy
Advertisement:

A common way for mad scientists to name machines, devices, and gadgets: take the thing's function and add -O-Matic or inator to the end. These tend to do exactly what they sound like they do. Usually, they won't give any explanation at all how they do what they do, and no matter how outlandish the science, or specific the purpose, they won't be able to do anything else.

Related to iProduct and all those others by way of Zeerust (and also, of all things, Radio Flyer toy wagons which came along in the '20s); in the golden age of the B-Movie in The '50s one of the latest gee-whiz technologies was automatic transmissions in cars, hence naming related to that.